The success and the impact of the movie Bohemian Rhapsody still continues to reverberate with me personally. It occurred to me that this current generation possibly were never exposed to the concept of risk taking in music. So I posed a question on social media ” Am I just being an old guy or is Bohemian Rhapsody the first place young people experience the combination of musicians and risk taking. If I am wrong please provide examples.”

The initial reaction of my friends mistook it for bandwagon jumping or the younger people being close minded to ” old people” music. None of them provided examples nor did they really address the concept of risk taking. Like I said in the first time I wrote about this movie, that the character Ray Foster was not a single person but an amalgamation of the “suits” in the music business. If you want to listen to songs about the suits there are two exquisite ones in the Pink Floyd album Wish You Were Here titled Welcome To The Machine and Have A Cigar. Both document the dance between rock and rollers and commerce. 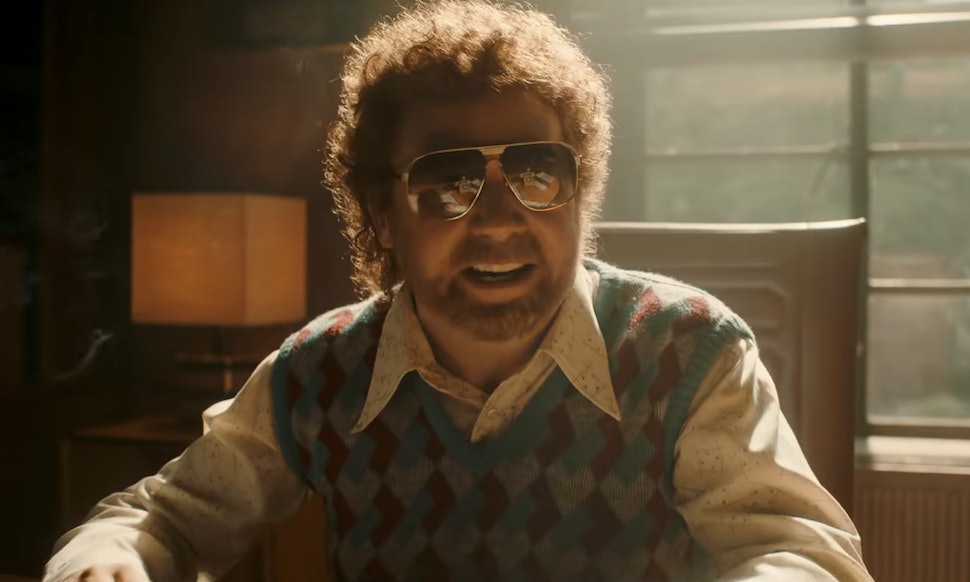 This character is there to manage risk.

In that scene with the band, Littlefinger, Miami and Ray Foster one can not help but think about the old adage in the publishing business. A writer will write based on their ability and vision but the publisher has to worry about what they think the public will buy. The more I think about that scene the more I love it. The band had their vision of the single being 6 minute long with operatic elements and obscure references. Ray Foster was there to provide push back. Keep in mind that in 1975 the disco era was ramping up. The Hues Corporation Rock the Boat was a #1 hit the previous year. The band knew what it wanted. In fact in 1985 they had a song called One Vision.

Taking musical risks is one thing. For it to be a reality you will have to get the guys paying the bills to play along. The quote from that meeting “It’s my money, I say what goes!“. We know the rest is history but Queen had to put their foot down. And yes I believe Roy Thomas Baker had something to do with the fact that the song Bohemian Rhapsody ultimately sold despite its quirkiness.

I will use the office meeting scene from Bohemian Rhapsody as a springboard to talk about different aspects of risk. Many people choose to define risk differently in the financial field. For most people risk is the chance you will lose all your money in an iffy investment. Some people choose to define risk that your money will lose it’s purchasing power after taxes and inflation. Might be a good time to read up on the topic?

One of my favorite examples of risk taking is not from the musical world but the world of cinema. Most people would be satisfied if they were the brains behind Godfather and Godfather II. Yet Francis Ford Coppola took the profits from those movies and finance his vision of the fusion of a Joseph Conrad novel and his experiences in the Vietnam War. The beauty is we get to be stressed with him and his family in a documentary filmed here in the Philippines called Hearts of Darkness. This was one of my earliest contributions to GRP.

I feel that to kickoff my personal look on risk taking in recorded music I have to look into the dynamic that existed between The Beatles and the Beach Boys creative spark plug Brian Wilson. You have to respect the Beatles who despite being on top of the world in the mid sixties kept pushing the envelope which is a metaphor for taking risks. Helter Skelter was recorded because they felt insulted that the Who were considered a louder band. Sgt. Pepper’s Lonely Hearts Club Band was the Beatles becoming a fictional band. Of course they had to sound different from the Beatles. They were inspired by the Beach Boys’ Pet Sounds and in a strange twist Pet Sounds was inspired by the Beatles Rubber Soul.

Iron Butterfly‘s “In-A-Gadda-Da-Vida” has been referenced in many TV shows like the Simpsons, Beavis and Butthead, Coach, Moonlighting and the movies Manhunter and Forrest Gump. Queen fought for the 6 minute Bohemian Rhapsody. Iron Butterfly fought for the 17 minute track which is more popular than the 3 minute version the record company released as a single. Manhunter’s director Michael Mann was better known as the guy behind Miami Vice when he gave “In-A-Gadda..” the big screen treatment in the climax of the movie. He used more than nine minutes of the song as build up in the battle  between good and evil.

You saw the resistance the suits gave the song Bohemian Rhapsody not only because of the opera music but even the different names ( Scaramouche,  Galileo, Beelzebub)    mentioned. I would love to be a fly on the wall when Pink Floyd tried to sell the record companies on these concepts: growing up without a father and blaming the war, feeling like a pawn, mortality, materialism, George Owell’s Animal Farm, the process of getting signed by the record company, personal isolation, internal conflict symbolized by a courtroom battle. Even if their music can be categorized as ear candy their lyrics were anything but fluff. More shock than awe.

Alan Parsons worked on Pink Floyd’s Dark Side of the Moon as the engineer and shortly after was given his own act to produce. So their debut album was based on the literary works of Edgar Allen Poe. The risk worked because many more albums followed with such concepts as technological determinism, the mystery of the pyramids , gambling addiction, the allure of women, the architect Antonio Gaudi and the evolution of artificial flight.

Joe Jackson ( not the father of Michael) was lumped in with Elvis Costello and others in the late 70s as “Angry Young Man songwriters”. He recorded the Jumpin Jive which were covers of songs from the 40s without selling out to the 80s conventions. 1984’s Body and Soul was recorded “live” with just two microphones for the whole band. No overdubs. 1986’s Big World was also recorded live in a concert hall with a silent audience. Lyrically it is about the culture clashes while travelling and other things international. In 1987 he released Will Power an instrumental album with arrangements associated with classical music. Out of the five tracks, only one had vocals. How many artists do you know with hits like Is She Really Going Out With Him and Stepping Out release albums with almost no vocals and you really hear flutes and clarinets?

I doubt many of you would equate the  concept of musical risk with the name Barry Manilow. 2:00 AM Paradise Cafe is an obscure recording even for Manilow fans. It transports you to a time and place with a handful of musicians playing acoustic instruments on a cramped stage late at night. Many of the contributors were better known in the 50s and 60s in the jazz/ blues world. They rehearsed for three days then recorded the music uninterrupted with some overdubs after. Think of all the big hits Manilow had at the time like Mandy, Copacabana, I Write the Songs, Could It Be Magic and Even Now then he tries this. There are many acoustic albums but none with the story of how they came to be like Nebraska.

Usually risk taking in any arena can be equated to head scratching. Like a surprise onside kick in football. When Bruce Springsteen released 1982’s Nebraska it was definitely met with some head scratching. He was on the cover of both Newsweek and Time, the albums Born To Run, Darkness On The Edge of Town and The River were well received by critics and record buyers. The album was basically recorded in his bedroom while he sang and played guitar while sitting on a rocking chair.

What we hear on Nebraska was only intended for Bruce’s E Street Band so they can record the songs in a style and manner we are more accustomed to. For whatever reason those recordings did not click. There was an attempt to duplicate the demos in the demos in the studios yet the magic they perceived in the original could not be replicated with all that equipment in the studio. So they ultimately decided to dress up the original primitive demos into a product worth putting on a record. It resulted in a haunting yet essential part of my music collection.

The lyrics offer such themes an officer of the law compromises his duty because of brotherly love, reincarnation, late night radio offerings keeping you company while driving, the minimal budget for family transportation, killers musing about their executions , father and son estrangement and other similar scenarios.

Like it or not risk/ reward is a natural occurrence in life. Socialism likes to believe they can legislate risk / reward out of life. They might as well legislate against gravity. No guts, no glory. The cream rises to the top, the bigger they are the harder they fall. Play to win instead of playing not to lose. Bohemian Rhapsody is about a musical act that had the cojones to write and record music that stood out even from their very own repertoire. They did not want to repeat itself. Our current musical landscape doesn’t seem to feature albums, song writing and musicianship. Instead of wowing the audience, musical acts seem content with conformity to each other. So nothing really lasts because nobody has the testicles to do what Queen did and constantly evolve,  innovate and challenge. To continue being fresh while song writing, recording and playing on stage. In order to make their mark in music history they vowed to imitate no one, even themselves. In the words of Jim ” Miami ” Beach from the film: “Fortune favors the bold.”