For those of you who have never been there, Seattle is a beautiful American city. Sorry, I forgot to add, it is a beautiful wet American city. It is located in the region of the continent where it does rain a lot. Which may not sound so great on its own but add in that winters are generally moderate and summers are not humid then it is not all bad.

Still no matter what the climate, Seattle is not generally known as a hockey town. Both the Seahawks of the NFL and the Washington ( University) Huskies represent what Pacific Northwest residents care about. There was a time that it was not unusual to find the Seattle Mariners near the bottom of the league when it came to attendance despite the popularity of their NFL brethren . There was a time they were flirting with 4 figure attendance per game.   Kevin Durant was a Seattle resident back when he could not legally drink in a Washington State bar. Lenny Wilkens brought Seattle an NBA  championship back in 1979. The Sonics also barely avoided a  sweep in the NBA Finals against Michael and the Bulls back in 1996. What is fascinating is that the NBA team left Seattle , Washington for Oklahoma City, Oklahoma. Seattle is  685 % more densely populated than Oklahoma City.  In 2014 the Seattle metropolitan area had a population of about 3.5 million.  In comparison the entire state of Oklahoma at that time was 3.8 million.  The size of the state of Oklahoma is 181,000 square kilometers.   The size of the Seattle metropolitan area is about  9400 square kilometers.   One confusing aspect of US geography is that many more people world wide are familiar with the city of Washington, D.C.  (District of Columbia)  than Washington State  ( 185,000 sq kilometers ) where Seattle is.  Seattle, Washington and Washington, D.C.  are  on the opposite sides  of the map.  One is in the Northwest corner of the country and as the other is in the vicinity of  the Northeast corner.  About as far away as you can get from  another city (3700 km)  and still  claim to be in the “north” of the US.   For the record, the only major professional sports team to call the state of Oklahoma its home is the Thunder. They also have minor league baseball, women’s soccer and G league basketball.

What mandated the exodus of the Seattle Supersonics to that urban metropolis known as Oklahoma City was an issue that Philippine sports fans know very little about. The battle between public and private funding of an arena.  In the Philippines it is all about MVP when it comes to sports since epal comes natural here. The only sports league in the world where the fans are expected to be loyal to advertisers. What the Philippines also knows little about is the climate of a sports town.  They know that Los Angeles has the Lakers and whatever cities LeBron and Shaq played in their careers. To a pinoy the sports identity  of a US city is only based on its NBA team.   Boston can win championships with the Patriots, Red Sox and Bruins but they will only be aware of the Celtics with Garnett and Pierce. Actually the term “sports” as in plural  is a misnomer since   pinoys only recognize one team sport only.  I also mentioned before that there are only three venues in the whole country that holds the nation’s attention on a regular basis and they are all in the same city. The idea of Imperial Manila also holds true in whatever passes for  sports interest there is in this country.

This article claims that there has always been a movement to bring the Sonics back to the NBA. Currently the Seattle sports scene does very well for a city in the West that is not in California with the Seahawks, Mariners and the Washington Huskies football program.  I will never forget my first time checking out the bars that were humming at lunchtime on a Sunday game day for the Seahawks.  These bars were on a main street  leading to the Kingdome. You could cut the buzz with a knife. Right now there is no big league pro sports team to watch in Seattle in the dead of winter. In between football ( the fall sport) and baseball ( the summer sport). Support for hockey in Seattle has been great even if they are not in the NHL.

What may be surprising is it looks like the NHL (National Hockey League) will beat the NBA to Seattle speaking  of winter sports. The NHL already voted 9-0 in favor of the Seattle group in October. The Seattle city council also approved approved lease and development agreements for what will eventually be the venue of the new hockey team. A realistic timeline for when the puck drops for real on an NHL season in Seattle will be either 2020 or 2021.  It should be noted that Seattle for decades  has only had junior hockey and the nearest big league team is  across the border in Vancouver.  Back in March there was a drive for deposits on season tickets and it took 12 minutes to sell all 10,000 available. 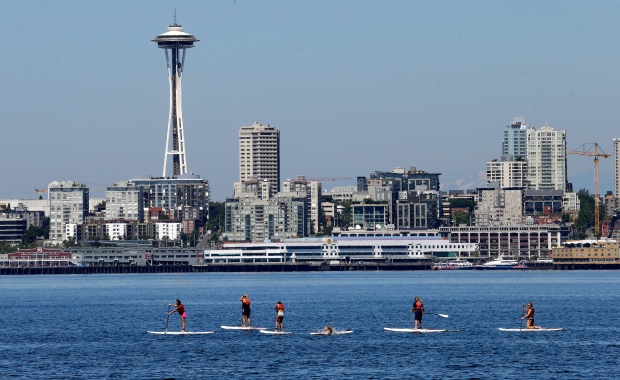 Huh? A city better known for hydroplane racing will get a big league hockey team?

Seattle is a hub for aeronautics and tech. It is known to be the head office of Microsoft, Boeing, Starbucks, Amazon, Nordstrom ‘s and Nintendo of America .  NFL Football thrives , NCAA Football thrives, Major League baseball is now in its 41st year there, others see Seattle as a US soccer hotbed  aside from the success of the local Seattle Sounders.  Millenials will have a hard time remembering the glory days of Jack Sikma, Gus Williams, Downtown Freddie Brown , Shawn Kemp, Michael Cage and even Gary Payton.  Seattle is the only contemporary American city that has NBA history with a championship but no team.

The NBA has the best TV ratings in the US among any league not named NFL. They are popular in places like China and are the only foreign pro sports league as far as the Philippines is concerned.   The venue issue drove the NBA out of Seattle but that same issue was hurdled by a non existent big league hockey team. Weird that with all the things Seattle has going for it and  all the other sports have a significant presence in that town while the banished NBA is still on the outside and barely looking in.  Pro basketball currently impacts the Seattle sports scene as much as pinoy basketball players historically  impact the NBA.

18 Replies to “The NBA Is Irrelevant In Seattle”