It looks like the balat-sibuyas Pinoys have found a reason to play the “victim” and “target of racist remarks” again. This time, the target of their ire is Lucy Liu. People will remember Ms. Liu from movies such Charlie’s Angels, Kill Bill, and Kung Fu Panda, just to name a few.

Letterman was basically asking her about her fitness regime. Here’s the part of the interview which I believe was easily taken out of context: To interpret her statement, all she said was that she could resemble a Filipino if her skin tone got darker. After all, by default, Chinese are fair-skinned. Hence, we get the questions that the emo balat-sibuyas Pinoys failed to ask themselves once again before reacting online: Where in what she said was it racist/insulting? Where exactly did she say that darker skin is inferior?

Nowhere.  The Filipinos just simply overreacted because of their hypersensitivity once again. Only Pinoys think dark skin means inferior; so predictable.

This isn’t the first time that Pinoys have reacted like this to what celebrities say. Teri Hatcher, Alec Baldwin, and Claire Danes all came before this, and Lucy Liu certainly won’t be the last one that they’ll overreact to.

The Pinoy reaction to statements such as this one, betray a rather ridiculous and condemnable character trait: they are riddled with tremendous insecurity, lack of comfort in one’s own skin (so to speak), and a massive inferiority complex.

The sad part is, Pinoys haven’t exactly been doing anything to overcome their insecurities, either. Ad campaigns like that of Bayo and Belo men did nothing but aggravate the problem and scream political incorrectness all over the place.

I’ve seen a few comments in discussion groups by level-headed people. They are puzzled, as I am, as to why Pinoys make such a big deal of what celebrities say about them. There are more important issues that warrant more attention, such as the mess that their social, political and economic landscapes are currently in. Of course I agree that there are more important things to be concerned about. However, the insecurity that Pinoys exhibited here, and which they will continue to exhibit in the future, is at the heart of the Pinoy condition. If only Pinoys weren’t more concerned with form than with substance, then we would not be so affected and put connotations of racism or supremacy where there are none.

Pinoys, are inherently racist too. They consider fair or white skin superior to brown skin. They routinely throw derogatory remarks at other people such as “chekwa”, “bumbay”, “kano”, and “egoy”, just to name a few. Once again, the emphasis is on form, over substance. Substance transcends skin color; Pinoys apparently, do not. This time, though, can we attribute this to their inherent insecurity as well? Perhaps, but there is more to Pinoy racism than meets the eye. That would be a subject for another write-up. One thing is for sure, though: Pinoy society does not allow the kayumanggi to be comfortable in their own skins.

It looks like Pinoys are proving the following statement true. I label it “A fundamental law of social media motion”. 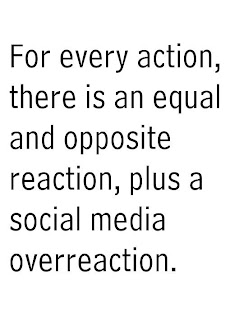 In the end, Ms. Liu apologized. Why she should apologize for a misunderstanding that is the Pinoys’ own fault is something I will never understand.