Your perceptions will not change reality, but simply color it.

I just had what alcoholics call a moment of clarity.   To think that once I could not see beyond the veil of our reality… to see those who dwell behind. I was once a fool. To quote  Johnny Nash “I can see clearly now the rain has gone I can see all the obstacles in my way”.  It is a fact that Noynoy Aquino is the president of the Philippines. For the first time ever I see the wisdom behind the circumstances that lead to that fact. I am shedding old skin. I am turning over a new leaf. Noynoy Aquino , in the words of the Stylistics,   ” you, you make me feel brand new.”

I take back everything I previously said.   I believe  Noynoy Aquino to be  a true leader. I won’t go as far as making up fake accomplishments for him but suffice it to say he has this Je ne sais quoi quality about him that makes me feel so glad he is at the helm of this magnificent ship of state. If Noynoy is the Captain Stubing of our country the Julie Mccoy can be no other than that epitome of grace and class   his lovely sister Kris.   Always knows what to say and when to say it. Always so humble and shares the spotlight with those who deserve it. Even her exes have nothing bad to say about her. I am looking forward to her sons growing up and being bright ,   well balanced men. How can they not be? Children close their ears to advice and open their eyes to example. Tito Noynoy all his life has been an industrious go getter. Never one to leave a stone unturned. The epitome of perseverance. There is not one iota   of   Oedipus Complex in him. The word   of their mother Kris is as solid as the Rock of Gibraltar. Her promises as flawless as her virtue.

There is no more worthy recipient of your attention and more importantly no one more worthy of your tears than the mother of Joshua and Bimby. Pray for Kris.

Thank you Showbiz Government for the pic

This nation is so blessed with wisdom and good judgement that was hidden from me by my own cynicism. I have seen the light. From this point forward I am taking every campaign and every survey at face value. Not just in May 2013 but until the end of time. Filipinos will not fudge the truth. That goes double or even triple for Filipino politicians.

You know who are the modern day Apostles? The named in error “trolls” that inhabit Get Real Philippines with their feedback. They have used names like Fishball, Vicente, Sendonggirl and Eduardo. But you know the saying “a rose is a rose by any other name.”   Just like the Apostles of Christ , they spread the Good News risking life and limb all in answer to a higher call. The Good News is that Our Savior walks among us. In fact last week he was inspecting bus stations etc. They should be revered for always keeping the faith and having the courage to go into a savage land like Get Real Post to enlighten the heathens.  I am no longer a heathen and I have you to thank. I once was lost and now I am found!   Was blind but now I see.  There is rejoicing in heaven  or at least in Malacanang today. Because I was a sinner who doubted Noynoy and now I repent.  One man’s troll is another man’s savior. 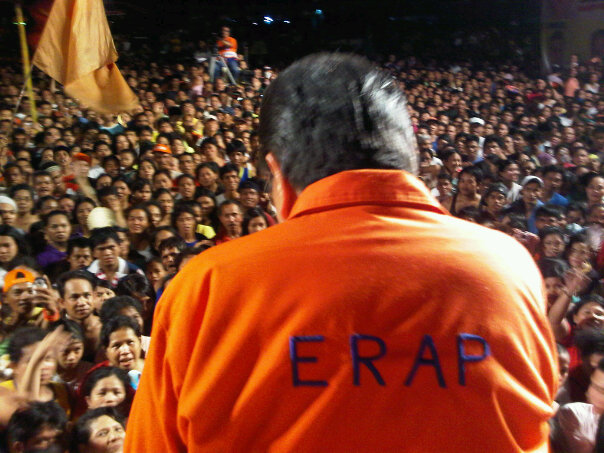 This man has so much wisdom to share too bad there could only be one president that could emerge in 2010.

Don’t laugh. Future generations will say the name Erap  in the same breath as Plato, Socrates and Friedrich Wilhelm Nietzsche. He is that good. I totally regret when I did not follow my heart and the masa in the idolatry of this genius. You don’t believe me? I just purchased a box set of his finest films which I will enjoy and benefit from. Every nuance teaches volumes. 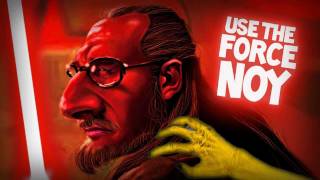 I have also seen the light in terms of the Woodward and Bernstein of the Filipino newspaper industry. I will no longer deride Conrado De Quiros   and William Esposo  for they have much to teach me. I must partake in a  crash course of their columns that I previously dismissed as hegemony in the interest of the Aquino family. The Aquinos never gave up on me and I will now love them as much as they love me. The Bible had it wrong actually. They attribute the Gospel to four people: Mark, John, Matthew and Luke. It really should be only be attributed to two people: the Gospel according to Conrado and the Gospel according to  William. That is all the good news in the media that you really need. 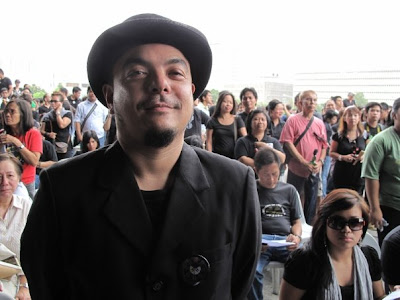 Carlos Celdran, you once said G.R.P. writers are leaving in droves.  I myself wrote eight posts   since you made that statement February 4.   Just so you can be partially right I will leave GRP effective today. You seem to hate GRP so much that you resort to personal attacks. Well I cower at the thought of you. I dread being in your bulls-eye.   Like  Khan Noonien Singh you have superior intellect and it is best for me to cut and run.  That is another good reason to leave here since I have seen the light. Whoever is not with you is against you. I will now be with you. In more ways than I care to go into in a family blog.  You need someone to hold up a billboard telling a major company to self copulate I’m there for you dude. Oh, I already ordered a bowler.

I will never get those hours back reading books and watching programs like Sopranos, Dexter,   Star Trek (1966) , The Larry Sanders Show, Twin Peaks, Northern Exposure and  WKRP   in Cincinnati. No more NFL: Football and Major League Baseball. From now on it is whatever channel Willie Revillame  is on and local telenovellas.   I will also guarantee I will be “astig” since I will also devour the PBA. I am enlightened and I am all in. My biggest regret now in life is I can never vote Noynoy Aquino for president. 2010 was my only chance and I let it slip right through my fingers and I watched it drift away. I can only blame my own ignorance.

Benign0, Ilda,   Ben,   FallenAngel. I enjoyed you as people but I think this is where we ideologically part ways. I am now enlightened since I had my moment of clarity. As the Bible says Love the Sinner and hate the sin. Benign0, I appreciate the chance you gave me here but I ask you to relegate all my previous political blogs to the fiction section along with all the Lance Armstrong material.   I  hope you will all break free from your ignorance as I have. In the words of John Lennon, “I hope some day you will join us and the world will live   as one”.

As penance for my previous  baseless cynicism I will   give up my Gogs screen persona and pick up a new handle to best describe the new enlightened me. In the words of the singer Donovan “They call me Mellow Yellow. “

27 Replies to “Hallelujah I Have Seen The Light!”