Within the Philippines, or any Filipino community abroad, Manny Pacquiao’s loss to Juan Manuel Marquez is considered a national tragedy. Outside, where the sense of national pride and identity are not hitched to the rise and fall of one boxer, life goes on. What Pacquiao’s loss has “inspired” in the rest of the world is a planking trend called “Mannying” and a whole collection of internet memes. One of those who chimed in was singer Justin Bieber, who posted a couple or so pics on his Instagram account.

The pictures he posted are the following:

Dad wake up – where an image of Simba (some people said Mufasa) from the Lion King was superimposed against Manny’s fallen body. 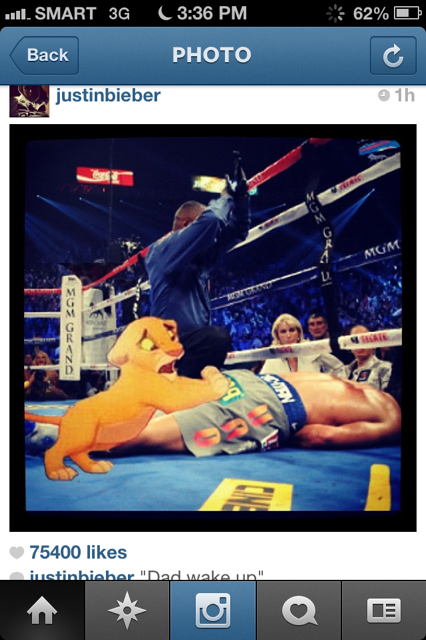 Pacquiao doing the lean with MJ…Classic moment – where Pacquiao’s image was superimposed against a picture of Michael Jackson doing his “lean” dance move in a concert. 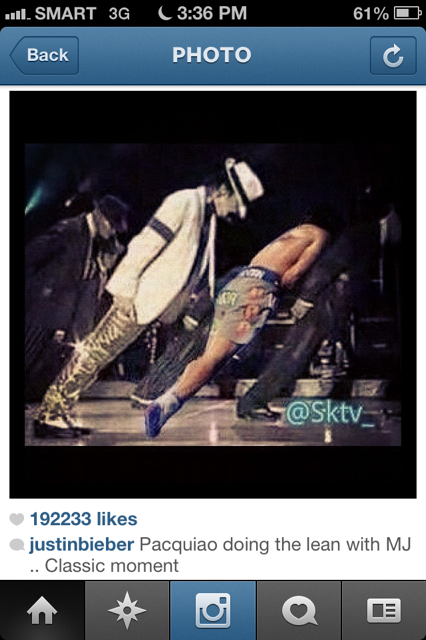 Look what Mayweather did to Marquez…#moneyteam #no competition – this is where Bieber implies that if Mayweather beat Marquez and Marquez beat Manny, then why would Mayweather have to fight Pacquiao? 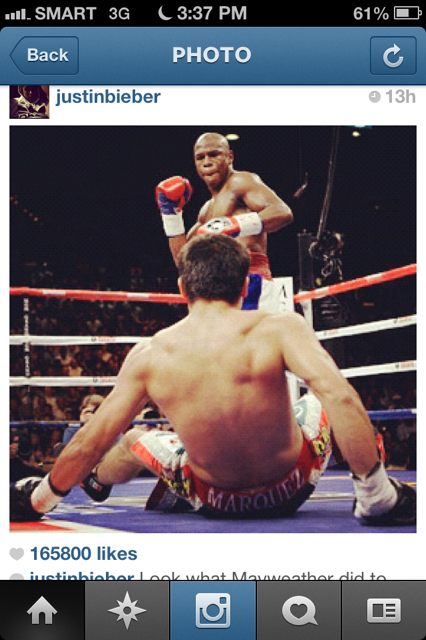 I just have one question: Who cares what Justin Bieber says or does, anyway? Apparently, the balat-sibuyas Pinoys do. To them it is such an affront to the sense of “national pride” that it sparked angry reactions online (from mostly Pinoys, of course), and a couple of hashtags #respectthephilippinesbieber and #RespectPacquiao.

Congratulations, Pinoys, you just shot yourselves in the foot again. You’ve once again shown everyone just how shallow, hypersensitive, and utterly ridiculous you guys are by giving a flash in the pan like Bieber attention for a meme that should mean absolutely nothing. Calling Pacquiao “a national hero” reflects just how much Pinoys have not changed in attaching themselves to celebrities and claiming his/her individual achievements as collective ones. Reacting to those pictures like they did, Pinoys have only proven that their self-worth as a nation rests upon validation by foreigners. They put too much weight on what foreigners say about Filipinos, but can’t take criticism, and are just too damn pikon (easily angered) for their own good. On the other hand, perhaps Bieber is just plain unlucky as of late. Recently he was booed at a Canadian football game. (Thanks to GRP writer Gogs for the tip!) Fans of Canadian football don’t consider him someone who “screams football”, you know? After all, his target audience consists of girls in their teens. Where are you going to find those in a football game?

The main difference between them and us though, is that Canadian football fans booed him because they don’t think he represents what their sport stands for. Pinoys booed him because he hurt the pride and onion-skin sensibilities of a people who desperately attach themselves to a sporting icon they consider “a national hero” who bring pride (read:validation) to their country. Big difference.

Let me just say it, once again: Onion skins are so damn annoying.