If you’re a Filipino, ask yourself this: are you one of those who go around saying that you’re proud to be Pinoy because of Pacquiao? Are you still going to be proud of Manny even if he loses? Even before the results of that most recent fight against Juan Manuel Marquez got out, we already knew that someday he was going to lose big. We just didn’t expect it to happen so soon.

Yes, you read that right. Manny Pacquiao lost. He walked into a punch which hit him on the chin and sent him to the ground for good in round 6. If you read that headline by Philippine Star, though, I find that “national day of mourning” thing a bit déclassé. Why would the Philippines declare such for a guy who isn’t even dead, but not for the ones who perished in typhoon Pablo? But I digress…

The more interesting display of Filipino post-fight idiocy happened in social media. We wondered how Filipinos would react if Pacquiao lost? Well, in a nutshell, they were their usual pikon and sore loser selves. For one thing, a hashtag called #RETOPacquiao started trending. In this hashtag, pictures were shown imitating the downed pose of Manny Pacquiao face first on the canvas, sort of like the pictures below: 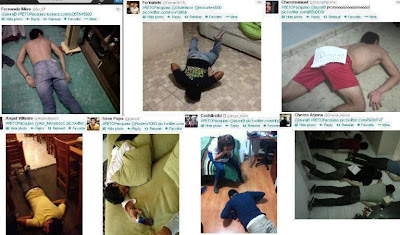 While I don’t condone this “planking” thingy, you’ve got to admit, it was funny as hell. Predictable as ever though, the balat-sibuyas portion of the Filipino population took offense with it.

I saw first the hashtags #PacyouMexicans and #olamexicopakyukayo and assumed that they were but butthurt responses by Filipinos to the “planking” pictures posted on social media. Yet upon digging deeper, it looks like there was yet another thing that was a cause of trouble, and an apparently justifiable reason for Pinoys to be a bit angry.  There was yet another Twitter hashtag, #sufracomolaesposadepacquiao. In English, “suffer like Pacquiao’s wife”, seemingly referring to the way Jinkee Pacquiao cried when she saw Manny Pacquiao slumped in the boxing ring after he got knocked down.

In fact, it has gone so far as to provoke hacking attacks on Mexican websites. Pinoys, coming off from being dubbed as one of the most emotional people in the world, didn’t even bother to ask a sensible and logical question before starting those two “pakyu” hashtags: Was it really Mexicans who started that hashtag about Jinkee?

Bottom line, all that activity on Twitter and Facebook wouldn’t have meant squat had Filipinos not projected themselves onto Manny Pacquiao. If Filipinos hadn’t been using Filipino pride as a way to cover up their deficiencies, then perhaps Filipinos wouldn’t have put egg on their own faces in the Twitterverse. The “planking” and the hashtags, to me, were not worth the trouble.

Of course, no mention of Filipino social media idiocy is complete without mentioning #Filipinopride. I’ve been wondering what it was going to take to finally deflate that empty and false pride which has been nothing but destructive and downright stupid. I thought, maybe Pacquiao’s loss here would do it. But no, it looks like Pinoys are stubborn and pig-headed as ever. Just look at the picture below and see why: It reads: “We were with Manny when he won. Let us be one with him in his loss. Admit it, the Pinoy has been more recognized because of him.” I don’t know how many times this statement has to be repeated: Manny Pacquiao’s achievements do not prove the Filipino people’s greatness, they prove Manny Pacquiao’s greatness. Tell me another thing, then: if Manny was gracious in his loss then why are there still other Filipinos who aren’t as such?

Pinoys will eventually learn, by the way, that projection is a double-edged sword; if they keep on insisting the greatness of the Filipino people every time Manny wins, then they should expect that every time he loses will be projected unto them. Manny most likely lost because he split his time among being a congressman, an entertainer and a boxer. Instead of excelling in one aspect, he has become mediocre in all three (3). Therefore, Manny’s mediocrity and downhill slide are now but examples of Filipino mediocrity as a whole.

Filipinos never learn. Different medium, same stupidity. All this brouhaha shows that Filipinos can’t take as good as they dish out. What are the examples of supposedly “innocent” Filipino jokes? This one about telling the Chinese to kiss our asses, for one, and this, by Gel Santos-Relos, for another. The difference between these and our case with Manny’s loss is that the target audiences simply ignored them. “Who you Filipinos?” kumbaga…

There’s a saying in Filipino: Ang pikon, laging talo. (the short-tempered always lose). It explains a lot about us, about why we are so loserly as a people. Wonder no more why the rest of the world doesn’t take us seriously, then.