Hey ! We are very lucky to have an all wise president. No accomplishment at all but gets elected. Now he  knows who is guilty and who is not why bother with expensive court system? Just give cases to our all wise Solomon like president. We are all so blessed to be living in a time where our president is not only extremely gifted in assessing situations but also is never shy to let people know what the proper outcome to be. Oh joy.

The latest example of our all knowing President telling us what is what should never be when he  was quoted Friday  saying before returning home from Australia that Gloria Arroyo and Renato Corona could be reunited in jail if they were convicted in the criminal cases against them.  Arroyo ally Rep. Danilo Suarez responded to this statement suggesting a premature verdict of guilty. Siquijor Rep. Orlando Fua on the other hand remarked that the Aquino statement is an indicator of his vindictiveness. Predictably  Abigail Valte falls on the grenade of another head scratcher quote from the President. The Deputy Presidential Spokesperson Valte insisted there is no cruelty or vindictiveness, as Arroyo and Corona are afforded their rights.It’s statements like this make me laugh and remember a quote by Woody from Toy Story “You’re my favorite deputy!”

I have a few critics that rather I not write analysis of our current president. The thing is I am motivated to write because it’s a response to what we are being told and what we are told has always made me laugh. I rather write than just accept what  that Triumvirate of Truth ( Valte, Lacierda and  Carandang or VLC ) tell me at face value. Noynoy famously told the Filipino people that we are his boss.  Every decent boss on the planet has every right to question the statements and actions of their employees. No exception.

I have said on many occasions that I am no legal expert  nor do I play one on TV. But even somebody with just the basic concepts of law can see Noynoy Aquino really has no interest in following it to the letter let alone upholding it.

Henry Ford famously said “I am not the smartest, but I surround myself with competent people. For those of you who have no idea who he is please Google him. He only revolutionized your life and the life of your grandparents. Let’s contrast Henry Ford’s approach with Noynoy’s approach. Which is surround yourself with VLC the Triumvirate of Truth. With God as my witness I promise  you I had no idea that was a name already used by pro wrestlers. Then again pro wrestling might be a few notches up the IQ food chain compared to the Malacanang press corps these days.

Henry Ford understood synergy. Henry Ford would have never been a contestant in Jeopardy. What Henry Ford did understand was what he brought to the table and to assemble different people  who brought other things to the table that complimented what he had. As Mother Teresa said – “I can do things you cannot, you can do things I cannot; together we can do great things.”

Synergy is everywhere in nature. If you plant two plants close together, the roots commingle and improve the quality of the soil so that both plants will grow better than if they were separated. If you put two pieces of wood together, they will hold much more than the total weight held by each separately. The whole is greater than the sum of its parts. One plus one equals three or more. The challenge is to apply the principles of creative cooperation which we learn from nature in our social interactions. The very way that a man and woman bring a child into the world is synergistic. The essence of synergy is to value differences – to respect them, to build on strengths, to compensate for weaknesses.

Should you find Dr.Covey’s explanation too deep you can try the much shorter explanation of Coach Herman Boone from the film Remember the Titans. The fact that anger for anger’s sake is never constructive. You must channel that anger in harmony with a group effort. ” Football is about controlling that anger, harnessing that aggression into a team effort to achieve perfection!”. There is a difference between Carandang and company justifying Noynoy’s words and actions and making excuses for them. By now you should be convinced which is which.

Jojo Robles of The Manila Standard does not seem convinced there is much synergy in Malacanang palace.

” I’ve always believed that Aquino is ill-served by his minions because they refuse to contradict him or advise him that taking a particular course of action could have disastrous consequences, like making a tasteless joke about a sick person while on a state visit abroad. Aquino doesn’ have anyone who can tell him he may be wrong and not be scared that he will lose his job the next day. People like Valte and Lacierda are crippled by the fear that if they tell Aquino that he may be mistaken, they will be unemployed. And because Aquino’s officials are for the most part underachievers in their respective fields, they will never be able to find jobs after leaving government that will even come close to the ones they have now, with all the perks and the other appurtenances of power they enjoy.”

For me the key quote in Robles’ piece about All Noynoy’s Men (and Women) is ” they have already been promoted way beyond their level of competence.” How I personally interpret that is ideally you want any team to come from a position of strength. You get people who are already good in their fields and appeal to their sense of duty and nationalism to achieve a place in history in government. Robles in his piece describes an anti Henry Ford scenario with Noynoy. I tend to agree since I do develop some  sense of pity for the “Triumvirate of Truth ” since  as Ilda puts it, Noynoy barely gives them much to work with.

I think I have been prolific in writing about our president even in the days when he was a candidate for the simple reason that every self help book ever written describes the opposite of what I see in him. He had no burning desire to be president. He did not work himself towards it nor did he hone his leadership skills someplace.  Noynoy benefited by having the right mother die at the right time. There is a formula for success we should all follow. He is not a president by design but by serendipity. Serendipity is  defined as the faculty of making fortunate discoveries by accident. Noynoy Aquino is our Accidental President. He may be accidental but us, the People of the Philippines bought him sight unseen and we are on the hook for whatever he will do to the country from 2010 and beyond.

I see a pattern of behavior in terms of the President ramming things through. Look at instances in your life where you are rushed. You don’t tend to make the best decisions because you have no time to think. Look at instances in your life when your boss “suggests” something. You either follow through on the suggestion or you will face more wrath if you go your own way and it doesn’t work out. In baseball it is called “running through a stop sign”. This stench of ramming things through reeks of the mentality ” Give him a fair trial then hang him. ” Everything is predetermined. Just like Noynoy’s reunited premonition.

To elaborate on Robles’ Wheelchair Gang piece I doubt the current crew (based on Noynoy’s instant classic headscratchin’ quotes) can ever muster something as simple as “boss , you said this but you are doing this!”. There are four possible paths why his crew seems incapable of saving Noynoy from himself:

Just this week alone Noynoy tells the now famous “Wheelchair ” joke and Ms. Valte says don’t blame him since he did not compose the joke.  My colleagues Ilda  and FallenAngel both poke holes in the excuses that come out of the Palace.  Noynoy in October talked to the  business community   about integrity and having a level playing field. Yet he is the same person whose trademark since in office was not even bothering with procedure  . Just like when they kicked off the Corona witch hunt  Finally Noynoy’s signature catchphrase “daang matuwid” just like the first example he gets somebody with a pending case with the  Sandiganbayan and gives his own personal verdict and gives that person a very sensitive position overseeing elections a few months before the 2013 elections kicks off. Then he sees nothing wrong with personally providing cash for the bail. At this point not only am I truly confident that Noynoy has no clue what a conflict of interest situation is but I am pretty sure he can’t spell it either.

There is a quote a fish stinks from the head down. Let me give a hypothetical to that idiom. If you put someone in charge of something  but he has never been in charge of something before. Never had real responsibility before. Never earned his or her way into a position of authority then don’t be surprised if your organization is not organized. Substandard results can often be attributed to substandard leadership. 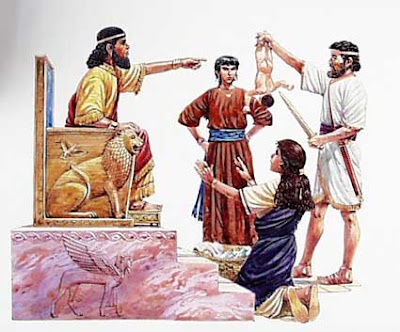 For those of you who took my Solomon comparison to Noynoy earlier at face value, please consult Charlie Brown here. Because if Solomon was truly at par with Noynoy, during  the baby quandary episode he would have personally been the power saw operator.

75 Replies to “Reunited And It Feels So Good”