“Absolute id crashed into absolute superego…as the uptightset man in America shook hands with just about the loosest.” (Mark Feeney on the ‘Elvis meets Nixon’ meeting) Elvis Presley is such a universal icon but how many of us know even some of the episodes of his zany life. One of the most bizarre chapters was when Elvis met sitting US President Richard Nixon. Elvis had many obsessions: Polaroids, Karate and Fool’s Gold Loaf. Another such hobby was collecting badges. It was this pursuit that lead Elvis to this head scratcher of a tale. On December 21, 1970 Elvis and two of the Memphis Mafia went down to the White House. He presented Nixon with a Colt.45 (that is still on display to this day in the  Richard Nixon Library and Birthplace in Yorba Linda, CA. ) and a handwritten letter on American Airlines stationery that contained the following :

First, I would like to introduce myself. I am Elvis Presley and admire you and have great respect for your office. I talked to Vice President Agnew in Palm Springs three weeks ago and expressed my concern for our country. The drug culture, the hippie elements, the SDS, Black Panthers, etc. do NOT consider me as their enemy or as they call it The Establishment. I call it America and I love it. Sir, I can and will be of any service that I can to help The Country out. I have no concern or Motives other than helping the country out.

So I wish not to be given a title or an appointed position. I can and will do more good if I were made a Federal Agent at Large and I will help out by doing it my way through my communications with people of all ages. First and foremost, I am an entertainer, but all I need is the Federal credentials. I am on this plane with Senator George Murphy and we have been discussing the problems that our country is faced with.

Sir, I am staying at the Washington Hotel, Room 505-506-507. I have two men who work with me by the name of Jerry Schilling and Sonny West. I am registered under the name of Jon Burrows. I will be here for as long as it takes to get the credentials of a Federal Agent. I have done an in-depth study of drug abuse and Communist brainwashing techniques and I am right in the middle of the whole thing where I can and will do the most good.

I am Glad to help just so long as it is kept very Private. You can have your staff or whomever call me anytime today, tonight, or tomorrow. I was nominated this coming year one of America’s Ten Most Outstanding Young Men. That will be in January 18 in my home town of Memphis, Tennessee. I am sending you the short autobiography about myself so you can better understand this approach. I would love to meet you just to say hello if you’re not too busy.

P. S. I believe that you, Sir, were one of the Top Ten Outstanding Men of America also.

I have a personal gift for you which I would like to present to you and you can accept it or I will keep it for you until you can take it. 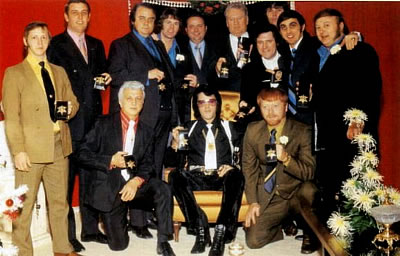 Considering Elvis’ own daily acquaintance with pills the premise can be seen as hilarious. Elvis comes across as so two faced he might have been better served on the Philippine Senate. As recounted by the book Down On The End of Lonely Street, when news hit the inner circle back home that the King was awarded a federal narcotics badge, “the honor brought guffaws from Presley associates , who knew that if ever there was a narcotics authority, it was Elvis Presley“” 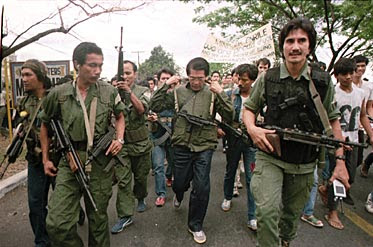 Juan Ponce Enrile is no stranger to my blog. This week the Senate President discussed an alleged Senate coup targeted at him.

“There are always people who are unhappy with the leadership of anybody,” Enrile told reporters when asked about the ouster moves. “I got the information from a reliable source but I will not discuss that,” he said.

I actually believe him. Considering his history,  if ever there was a coup authority, it was Juan Ponce Enrile

4 Replies to “Elvis, Nixon and Enrile”