Were the pinoy drug mules as calculating as Billy Hayes?

I first encountered Midnight Express not by watching it on the big or small  screen but by the music. The eight minute instrumental “Chase” by Giorgio Moroder (Donna Summer’s producer) was a minor hit but had my admiration. I bought the full soundtrack about eleven years after I first heard “Chase“. It was still another dozen years or so before I had the means to watch Alan Parker’s film. Calling it disturbing does not begin to cover it.   This movie should be mandatory viewing not only for all OFWs who will be in position to be drug mules but more importantly to the President and Vice President of the Philippines before they spend one more red cent on the foolishness of diluting another country’s justice system. Any Filipino lecturing any other nation on justice is like Erap Estrada making a sermon on the importance of a graduate degree. Is he trying to save a life or using the situation to make headlines? Second part seems to be working.

Let me get this straight. Our country does not put away people for crimes like drug smuggling and murder. China does. Their system seems to work better than ours and we are supposed to impede it just because pinoys are involved. It’s not an issue of of guilt or justice anymore it’s racism. Yes this is what the government does to make it seem like they are you in your corner. Go ahead smuggle drugs in China and when caught we will have your back. Never mind pinoy justice is non existent. We will tell China what to do.Go ahead and smuggle drugs in China. When you are caught we promise our Harvard educated Noynoy suck up Mar Roxas will not call you “tigas ng ulo”  (Hard headed in English.) That is assuming we can get Mar away from his sideline gig as spokesman for AyalaLand.

If you are getting a feeling of Deja Vu because this has played out before. Pinoys go abroad , break the laws there and are found guilty. Noynoy will tell the foreign courts how to operate their judicial system. According to the DFA, as of June 2013, there are 213 drug-related cases  involving Filipino nationals in China. Proud to be pinoy! Like it or not those 213 drug cases represent the Philippines more accurately than Jessica Sanchez or Eric Spoelstra ever could. Proud to be Pinoy !!!! For those of us who get to go abroad is it too much to expect one to respect the laws of the country you voluntarily choose to visit/ work in? These are the people our elected  officials opt to defend?

Laws are laws and rules are rules and drugs are drugs and guilty is guilty. Who cares if a Filipino gets caught in a foreign country breaking their rules??? Your funeral baby. Don’t do the crime if you can’t do the time. When another country allows you in their shores you are their guest. No excuses. No hangover from the Pinoy TNT mentality. No pampering under the guise of nationality. This is simply a reality check. When Jojo Binay goes over to China the same principles I mentioned in my Bembol Roco blog are in effect.

Why should you and I pick up the tab for the lawlessness and recklessness of our kababayan? Binay and Noynoy are doing it for pogi points. Pogi points out of your wallet. Just because our government can stack the deck in their favor internally they can’t expect a similar luxury in other countries. If Noynoy was a competitor instead of a bully he would have wisdom that comes from experience. That wisdom could possibly guide him into picking better battles and using this situation as a teachable moment. People who compete and have exhibited responsibility are of no value to the Filipino voter as evidenced by their choice of Noynoy Aquino who is void of accomplishments. A true competitor can play by the rules and rely on their own skills and intellect to get to their goal. Two qualities I have never seen this guy exhibit. Noynoy may have been in Congress and in the Senate but he was wearing camouflage because in no way did that guy ever distinguish himself. Consider yourself part of the furniture as the song from Oliver Twist says. Noynoy  did not distinguish himself over his lifetime and we are paying for that lack of ability. 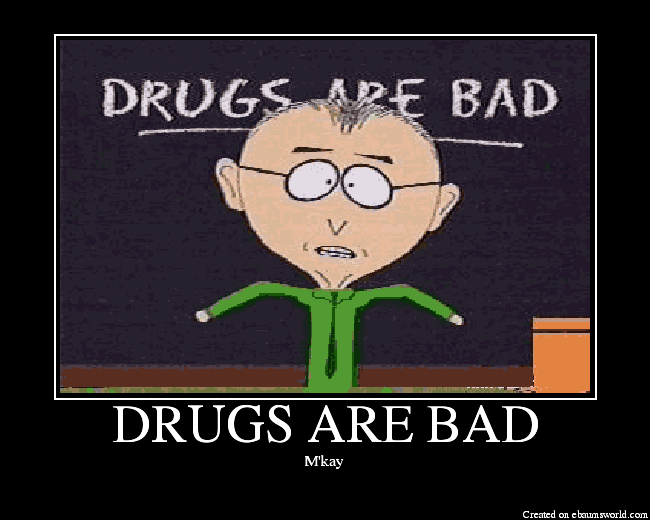 People might laugh at this but I bet the drug mules which they heeded the truth in this warning.

To quote Mr. Mackey  from South Park “Drugs are bad m’kay””. Life is about risk / reward. Peddling, distributing, manufacturing illegal drugs pays a lot more than typical jobs. Because it is all about risk/ reward. You assume the risks and your reward for navigating those risks is considerable. Then again so is the penalty. Why our government sees it as a constructive use of time and resources to defend people who engage in such moronic behavior is initially puzzling. Then I remembered one of them just loves flashing the “L” hand sign in lieu of delving deep into the issues. The other seems to have his reputation “boosted” by anonymous texts to the public.

I find the timing of this display congruent in terms of how Valte, Lacierda and company have dealt with recent issues. Always keep this in mind. As long as Valte or Lacierda say something on that podium it may as well be coming out of Noynoy’s mouth. Whatever is said has Noynoy’s blessing. For three years now let me summarize their approach.  If something is good pat us on the back, if something is bad , well let’s say there was more sound coming out of a mime festival. As I was gathering ideas for my treatment of the topic of drug mules and the fact that the Executive branch is trying to emotionally capitalize on their death sentences, it hit me that the National Football League is holding their Rookie Symposium. This has been going on for a few years now. The basic goal is to make new employees from the different teams around the league transition to the realities of life as an NFL player. It is essentially a job orientation for new employees to an industry. It is meant to open eyes to the realities of their particular situation. They do not go about it by chanting useless slogans or painting a picture of an idealized past. They do it by having people speak who were once in their shoes and what they experienced. They can tell it like it is because they have been there.  Ideally this dramatically hastens the learning curve assuming the speakers can get through to their intended audience.

Our  situation with the drug mules is what it is. Here is a radical idea. Instead of Noynoy and Jojo Binay using the situation as a public relations stunt. Why not use it as a learning experience? Why not use it as a cautionary tale? Don’t embarrass the families of course. But make it realistic enough to scare the crap out of anyone contemplating getting involved with trafficking drugs.  It is about time they do something value added for the benefit of all involved. Like the NFL Rookie Symposium, our nation should take that budget they have for begging for clemency and use it to educate and enlighten people who will go overseas to not fall prey to people who desire to traffic human beings and narcotics.

When I am not writing for Get Real Philippines, this is how I spend my free time.

This is a culture of impunity. You saw it with Cory and you are seeing it with Noynoy. In Noynoy’s case you are seeing throw it on the wall see what sticks school of prosecuting if it someone who he sees is against his “daang matuwid”.     If it someone who is for him, he will declare them innocent and appoint them to sensitive government posts. It has more to do with what Noynoy differentiates friend from foe than the justice system taking it’s course. And they call themselves leaders. I have said in my previous posts that Noynoy and his mom have a combined nine years of the presidency between them. I have tried harder to go to a chick flick film festival (Sleepless in Seattle, Beaches, Meet Joe Black)  than those two have tried to bring Ninoy’s killer(s) to justice. It is that indifference alone that speaks volumes to defining the culture of impunity in this country. Again those two never were leaders nor will they ever be leaders. Noynoy could not lead a bunch of midgets to a platform shoe store. A culture of impunity will not usually result in leaders who are accountable.

Accountability. like I said a few months ago in a piece that I called 18 Statements You Will Never Hear Leave Noynoy’s Mouth. Noynoy will never take responsibility for something going wrong. Credit grabbers are like that. Anything good because of him, anything bad either deflect to somebody so far away removed from his own camp or keep quiet and hope/ wait it blows over. Often the past explains the present. Noynoy’s mother will gladly take the glory of 1986 but at the time when it could have hinged either way she was in Cebu not Edsa. Noynoy was a Senator and it is not unusual for a senator in the Philippine Senate to be a fugitive, mutineer or clueless about current issues.

Just about now, critics reading this might say that usual catch all phrase that you are all so negative.  There is a big difference between being totally positive about your situation and refusing to acknowledge reality and your role in improving on it. Samuel Johnson said Patriotism is the last refuge of a scoundrel. Based on this exercise of defending drug mules how can this NOT apply to Noynoy and Jojo Binay. This mentality encourages entitlement. It does not encourage accountability or even contemplation. Which pretty much sums up Noynoy.